I was meaning to write a profound and incendiary blog post today about something I recently learned of called The Tytler Cycle, but in my research, I came across an article written by John Eberhard and posted on CommonSenseGovernment.com. I don’t know anything about the author or the website it came from, but this essay is fascinating and communicates some of the very things I considered writing about.

Here’s the Wikipedia page on Tytler

Alexander Tytler [was] a Scottish historian who lived at the same time as the American Founding Fathers, [and] described a repeating cycle in history. He had found that societies went through this same cycle again and again, and that the cycle lasted roughly 200 years each time.

Tytler said the cycle starts out with a society in bondage. Then it goes in this sequence:

Tytler organized these items in a circle: 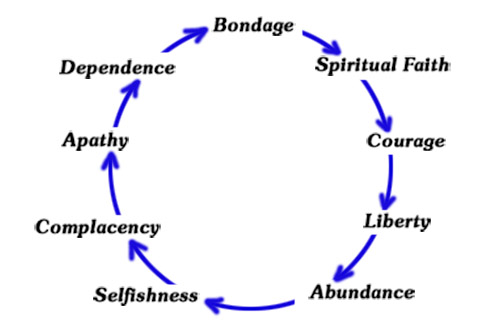 So to give a little more on the sequence above, a society starts out in bondage, meaning no or very limited freedoms. Now faced with a very difficult situation (bondage), they turn to religion and religious faith. Through this they achieve the courage they need to fight for and win their freedom. Next, through the benefits of freedom, they achieve an abundance in material things.

Now we start into the other side of the circle/cycle. We get selfishness and laziness setting in. Then we get apathy and finally dependence. Then we arrive back up at the top with bondage again.

I was intrigued. I looked for information on Tytler on the Internet, could find none, and finally wrote to Dr. Brooks. [Note: Dr. Shannon Brooks gave a lecture on politics at George Wythe College in Salt Lake City called “The Liber,” which is where Eberhard learned of Tytler.] He told first how to spell Tytler’s name, and told me that most of Tytler’s work has been completely lost. On further online search I found a number of sites with limited information on Tytler, but little more than what Brooks had said in his lecture.

I found this cycle to be very interesting in relation to where we are in the United States today. Dr. Brooks said he has asked the question of where the U.S. is in this cycle, in every one of these lectures he has given, to over 10,000 people to date. No one so far has said that we are on the right side of the cycle (spiritual faith, courage, liberty, abundance). Everyone has said we are somewhere on the left side of the circle (selfishness, complacency, apathy, dependence).

Let’s talk about selfishness for a second. We have a situation in America today where many people are trying to get whatever they can out of the “system,” with no concern of how this hurts the overall group of the United States of America.

You’ve got one third of the US Post Office and the US Printing Office out at any given time on Workers Compensation disability. Does anyone really believe that at any given time, one third of those workers are injured so badly (and injured on the job mind you) so that they are physically unable to work? There are cases documented of federal government employees, for example, going out on disability in 1983, and collecting $5,000 per month for the last twenty years on a completely fraudulent claim. And only now is something being done about some of these cases.

How about all the damage claims cases in the courts? We’ve perhaps lost our incredulity for suits against the tobacco companies. But how about the new crop of suits against the fast food companies because they somehow misled people about the fact that their food is not really that good for you and (horrors) the customers became fat.

Recently a person sued his neighbor because that neighbor’s dog bit him. And he won! Despite the fact that he was in the neighbor’s yard at the time within the reach of the dog who was tied up, and was throwing rocks, antagonizing the dog!

Then we’ve got the welfare class. My mother taught school in the inner city, and would sometimes ask kids what they wanted to do when they grew up. They would sometimes reply, “Get high and get drunk.” These kids’ parents had been on welfare their entire lives and these kids expected to do the same. Why work or learn or achieve anything in class?

What we have in the U.S. today is a selfishness crisis. And believe me, this did not exist in any way, shape or form 227 years ago.

We have a generation, many of whom are looking for a way to bleed the system to get their “fare share.” We could call them the “entitlement class.” But it goes beyond the welfare class to people with jobs and careers, looking for some way to “cash in” in some way. There are many variations, but the common denominator is people looking for a way to get some kind of a free ride, in a manner in which they did not work for it or earn it.

This reaches even to the tops of corporate America, with the recent bunch of corporate executives and CEOs that had a lapse of ethics and conscience and seem to have forgot such annoying things as laws, in the interest of their own personal fortunes. Enron et al.

I’m not necessarily saying we are at the “selfishness” part of Tytler’s cycle. We might have gone past that point. But we are at least up to that point. And complacency, apathy and dependence are not far behind. You could argue that some people today, such as those who have been on welfare for years, are in the dependence part of the cycle. I know that we had federal welfare reform passed a few years ago and that things are improving somewhat in that zone, but there’s no question that dependency has become a way of life for a certain portion of our citizenry.

And when a people becomes completely dependent, they can be made into slaves. Rather easily.

Since learning of this Tytler cycle, hearing the lecture myself and meeting Dr. Brooks, and discussing the issue with friends, I’ve been grappling with the idea that our country may go through a major crisis within the next 30-50 years.

As someone who feels that the United States is without a doubt the best form of government ever seen on this planet, the idea of such a crisis that could lead to what Tytler called “bondage” is very painful.

And yet, we can see the signs. Welfare recipients on the dole for life, people suing others for wacky reasons just so they can “cash in,” state legislators and judges insisting that we must give billions in free benefits to illegal aliens, the concept of personal responsibility becoming a foreign concept, insurance claim fraud accounting for one third of all claims in California – all of these things weaken the group, the group of the USA. These examples penalize the ones who work hard and try to build a society, because these entitllement types are tearing it down. Those who take responsibility are hurt.

So is the cycle inevitable? Are we heading down the drain in the next few years? I wish I had the answer.

But I will say that I don’t believe in the inevitability of our collapse. I don’t think we can believe in it or that it’s sane to believe in it. Otherwise that puts us squarely in the apathy part of the cycle. So I believe we have to assume it’s not inevitable.

We need to educate people on the importance of ethics, of contributing rather than just taking, on insisting that people work for and exchange for what they receive. Only in that way can we reverse this slide. And I believe we can.