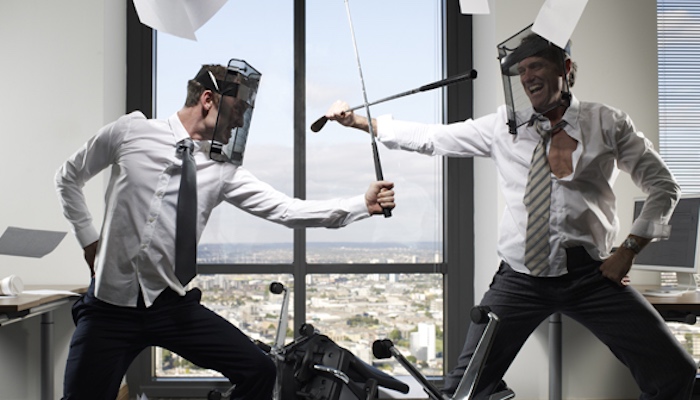 This article was originally posted on strengthscopeUS.com

We all assume work has to suck, but does it? Why shouldn’t we love what we do? It’s my mission in life to help companies create work environments that don’t suck by speaking, writing, consulting—whatever I can do to help companies see the big picture.

Over the past decade, I’ve worked with people in all kinds and sizes of businesses, from behemoth Fortune 50 companies to nonprofits, governments, startups, schools and almost everywhere in between. As you’d probably suspect, along the way I’ve had quite a lot of conversations with potential clients—people curious about how to utilize “culture” as a business driver, instead of how most companies view it (which is as a “perk,” if it’s even thought about at all).

When a “potential” doesn’t convert into a “client,” it’s usually due to some version of the following idea… which is, it turns out, a complete smokescreen. So today, I wanted to address the two myths that lie underneath it. (NOTE: If this sentiment wasn’t stated outright, it was strongly implied.)

“I’d love to work with you to…

[focus on my team’s collaboration abilities]

[get a better sense of what our culture actually IS, etc.]

Believe me, I get it. I’m too busy too, frankly.

The fatal flaw here is we’re implying that things will get less crazy at some point down the road. But will they? Doubtful.

And let’s be totally honest: you don’t truly want things to get a lot less crazy, because that would probably mean your business isn’t doing very well or there’s a recession… both of which are much more stressful than what you’re dealing with now!

As my friend Chuck says, there are no excuses or even reasons—there are only priorities. And YOU decide what those are.

At the risk of sounding too harsh: let’s stop pretending we didn’t create the reality we currently live in.

2. “I’M A SUPER BUSY PROFESSIONAL PROVIDING SERVICES WITH MY EXPERTISE.”

OK, so you’re a super-smart, C-level, VP, Director, doctor, lawyer, whatever — I understand that you’re kind of a big deal and that the organization needs the knowledge living between your ears. If you’ll allow me to translate, this statement is basically saying “I don’t have time to deal with this.”

But the fatal flaw here is this: you’re already spending your time and energy dealing with it. It’s just happening in other ways—in reactive ways instead of proactive ones.

It’s likely you already have some “people issues” you’re dealing with: A person on your team who needs to just get the info and move on, but instead wants to empathize and counsel everyone about their problems. A team leader who’s “stepping on” people’s ideas and draining the energy of the people around them instead of inspiring them. A company growth target that “forces” you to rush people through the hiring process.

It’s not any LESS time or energy consuming to deal with these issues as they happen (it’s actually a lot more frustrating, because if your chosen profession is not Firefighter, I’m guessing you’d rather not do that all day), but we often just keep doing it that way because it’s what we’re used to.

It’s kind of like washing the dishes or taking out the trash… you can deal with it now or you can deal with it later, but NOT dealing with it isn’t actually a choice. Unless you want to live among piles of garbage… but that’s a metaphor we probably don’t want to extend into our organizations.

So, let’s quit lying to ourselves—sometimes we just want the easier path, the path that allows us to keep doing what we’ve been doing. But, of course, the problem with that is that we’ll just keep getting exactly whatever we’re getting now.

You don’t need to hire us or anyone else to help you, of course, but let’s do everyone around us a favor and stop acting like we’re somehow a victim of the busy-ness that we’ve created. We choose our priorities, and those stories will create the world around us… whether we realize it or not.