Today’s post is by business card sketch artist Hugh MacLeod; I personally quite enjoy his slightly irreverent insightfulness. This excerpt, #8, is from his new book, “Ignore Everybody” where he describes 37 tips that he says have worked for him over the years. Read the first 25% of the book for free at gapingvoid.com, then go buy the rest. Enjoy! -Josh

Nor can you bully a subordinate into becoming a genius.

Since the modern, scientifically-conceived corporation was invented in the early half of the Twentieth Century, creativity has been sacrificed in favor of forwarding the interests of the “Team Player”.

Fair enough. There was more money in doing it that way; that’s why they did it.
There’s only one problem. Team Players are not very good at creating value on their own. They are not autonomous; they need a team in order to exist.

So now corporations are awash with non-autonomous thinkers. 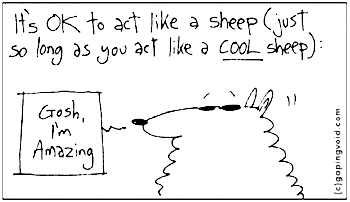 Creating an economically viable entity where lack of original thought is handsomely rewarded creates a rich, fertile environment for parasites to breed. And that’s exactly what’s been happening. So now we have millions upon millions of human tapeworms thriving in the Western World, making love to their Powerpoint presentations, feasting on the creativity of others.

What happens to an ecology, when the parasite level reaches critical mass?

If you’re creative, if you can think independantly, if you can articulate passion, if you can override the fear of being wrong, then your company needs you now more than it ever did. And now your company can no longer afford to pretend that isn’t the case.

So dust off your horn and start tooting it. Exactly.

However if you’re not paricularly creative, then you’re in real trouble. And there’s no buzzword or “new paradigm” that can help you. They may not have mentioned this in business school, but… people like watching dinosaurs die.