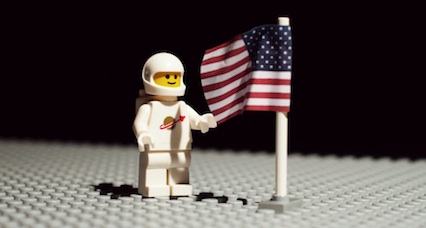 I had to write something about this, because it’s just so damn rare.

The other day I disagreed with my invisible mentor, Seth Godin.

In one of his posts, he said:

Tom Robbins, ranting in the Times, conflates the difficulty of making a living with the challenge of doing the writing:

This is nonsense on two levels. First, writing fiction is significantly easier than leading part of the Apollo mission (can we accept that as a given?). Second, and more important, it’s free! No gums are damaged, no thumbs are hammered, no shuttles are launched.

I realize what I’m going to talk about wasn’t the point of Seth’s article, but he’s off-base on something pretty important here — namely, his first point of “nonsense.” Tom didn’t say “writing fiction is significantly easier than leading part of the Apollo mission.” He specifically contrasted “the crafting of engrossing, meaningful, publishable fiction” (emphasis mine) with “supervising a lunar probe.”

These are completely different things.

I make this distinction in workshops all the time. If we’re talking about just doing something, people can do almost anything they put their mind to. The power of will is amazing.

But, if we’re talking about doing something well… well, that’s another story.

We can’t do everything well. Period. If by some miracle I could get drafted into the NFL, I might be able to be a linebacker. That doesn’t mean I can ever, EVER do it well. (If you’ve seen me, you know this is quite true.) I’m simply not built for it. Likewise, we may never be able to rap like Eminem or play basketball like LeBron James or sing like Mariah Carey. That doesn’t mean we can’t do other things with the same amount of mastery.

The talents it takes to write well and the talents required to successfully manage a lunar landing are completely and utterly different. This is why blanket statements about difficulty are dangerous — what’s hard for me might be really easy for you.

It all depends on who’s doing it.